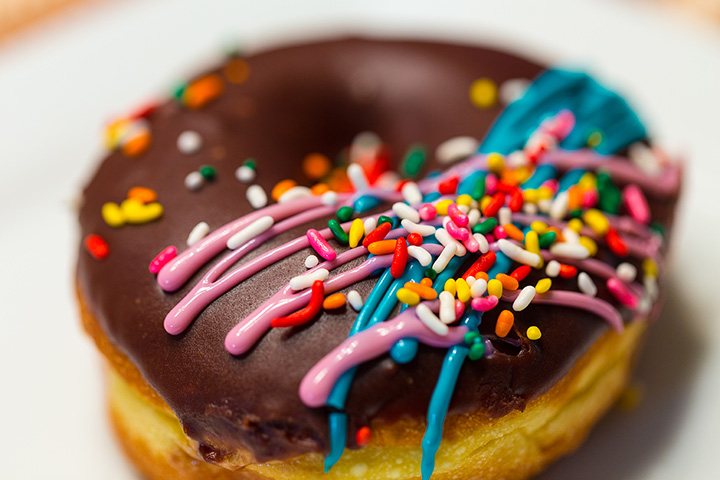 Doughnuts, some might say, have become the new cupcakes. The trend has quickly spread to Rhode Island, where you can find new twists and exciting flavor combinations in addition to your favorite classics. Grab a coffee, and give one of these delicious doughnut shops a try!

One bite of these delectable doughnuts, and you’ll be left “kneading” more. New to the Providence doughnut scene, Knead’s dense—yet somehow still fluffy—doughnuts have fast become a staple of the city’s food scene. Knead offers both classic flavors, like their sour cream old-fashioned and vanilla-glazed doughnut, as well as fun new twists. Go for their butter toffee crunch, a doughnut both sweet and buttery, and packed with the right amount of nutty flavor, too.

Even when it’s just opening at 5 a.m., Allie’s still has a line out the door! But don’t worry—Allie’s moves quick. Allie’s doughnuts are perfectly crispy, with frosting like whipped cream. At only $10 for a dozen, you’ll want to come back for more—quick!

PVDonuts was the original specialty doughnut shop on the Providence scene. PVDonuts is best known for its fluffy brioche doughnuts, like the Dunkaroo and the Everything Bagel Donut. They’ll soon be operating a late-night doughnut gig, serving beer and wine by night—and best of all, they’ll still offer doughnuts then, too!

The cases of baked goods at DeLuise can be extremely tempting—but just try one doughnut, and you won’t want to go for anything else. The glazed and sugar frosted are incredible, but don’t miss out on the decadent, rich chocolate-frosted ones, either!

Ma’s has been around for nearly 25 years, making their doughnuts fresh daily. Grab a honey dipped doughnut—the taste is reminiscent of fried dough straight out of Boston. Even the simplest of doughnuts taste great here—go for a plain cake doughnut with glaze, or an apple fritter.

Payne’s homemade doughnuts are simple, cheap and delicious, with a soft doughy flavor. Not too oily and perfectly light, you’ll want to have two or three of these delicious doughnuts.

Open from Labor Day until Thanksgiving, Hard-Pressed Cider Company offers a lot more than just cider. You’ll want to sample one of their incredible cider doughnuts, which use their own homemade apple cider and freshly-peeled apples to create these delectable doughnuts, each of which is coated in a perfect layer of cinnamon sugar.

If you’re going to get anything at West’s, make it the Bismark (or if you’re feeling worldly, call it a Berliner.) No one makes one quite like West’s. Even if you’re stopping in for a heartier breakfast, make sure to pick one up on the way out.